Some Dealers and Wholesalers buy "Salvage" or "Recondition" vehicles, then illegally "cleaned" their titles before they sell to the general public.

It is estimated that 1/3 of the totaled vehicles on the road today will have no documentation to show that the vehicle was once declared as salvage. CARFAX cannot report a total vehicle if the State did not create a salvaged or reconditioned title for that vehicle.

One of the significant concerns for used car buyers is how the used car industry recycles totaled vehicles back onto the used car lots. These once salvaged vehicles create a financial and safety risk for the general public.

Today's cars are built using robots to make precise welds during the assembly process. These welds are were made in an enclosed environment on perfectly formed metal to create a structural cage designed to protect the passengers. When a vehicle is in an accident, the structural components absorb the energy of a collision by crumpling and deforming the frame to protect the passenger compartment. Once the frame has been wrecked, it cannot be un-wrecked.

There are many ways that salvage vehicles return to the road. Here is just one example:

A vehicle is declared a total loss by an insurance company, either by collision damage, fire, flood, theft recovery, etc. A total loss means the vehicle cannot cost-effectively be repaired to mechanical and/or structural safety standards and should be cannibalized for parts only. The regular title is normally surrendered to the State, and the State would issue a salvage certificate. The salvaged wreck is then sold to a salvage yard or through a salvage auction.

However, unethical repair shops and dealers buy these salvage vehicles. They attempt to repair these totaled vehicles, or they will cut off or "Clip" the good sections off and reassemble these sections to create another vehicle. 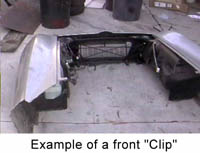 Many of these salvage vehicles will look good but, the structural components are still damaged and not repaired. While these cars may look good with a fresh coat of paint, they are structurally and mechanically unsound and worth only a fraction of the book value. Once again, these vehicles were declared "Totaled" by the insurance company.

But what about the title?

These salvage rebuilders ask the State to issue a negotiable title. Since the totaled vehicle was given a salvage certificate, the State will issue a title with the designation of "Recondition" or "Salvage," which means the vehicle was rebuilt from salvage.

Beware, these "Recondition" or "Salvaged" titles can be "Washed" or "Cleaned" by simply transferring the title back and forth to another state which does not include "Recondition" or other discrepancies on their titles. 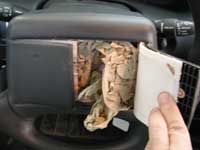 Once these vehicles have a "Clean" title, it is easy to get them to the auctions or sell them directly to the public. These once salvage vehicles can end up at reputable dealerships. There are also used car dealers, wholesalers, auctions, and curbstoners selling vehicles with questionable histories. The incentive is profit. Dealers and individuals can make twice the profit on selling a used car rebuilt from salvage versus an average used car. Ultimately, the general public will purchase, finance, and drive these vehicles, not knowing that they once were totaled

Recondition vehicles are not recommended for purchase. These cars may have chronic mechanical problems, and there is no way to determine if the vehicle is structurally sound. In a minor collision, the car's frame is likely not to protect the passengers. "Salvage" vehicles are not subject to federal safety standards.

Totaled vehicles from flood damage may not have any structural problems. However, these cars will have chronic electrical, mechanical, and rust problems.

CBS News' 60 Minutes estimates that 1 in 15 vehicles on the road today have been created from salvage.

You cannot negotiate your best deal until you know the EXACT condition of every component and system.